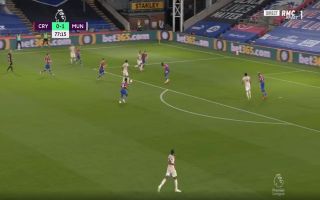 In the 77th minute of tonight’s Premier League clash between Manchester United and Crystal Palace, the Red Devils extended their lead after a well-worked team goal.

Marcus Rashford, who opened the scoring for the Red Devils, skipped forward from the halfway line before laying the ball off to Bruno Fernandes on the left-wing.

Fernandes returned the ball to the England international who played in his strike partner Anthony Martial with a perfectly-weighted first-time pass.

Martial held off the challenge from a Crystal Palace defender before tucking the ball into the back of the net from close range.

Take a look at the Frenchman extending Man United’s lead below:

Ooooooh that is a brilliant Man Utd goal ?

Fernandes, Martial and Rashford also played a key role in United’s opener against the Eagles, the trio are proving themselves as quite the potent threat.

Ole Gunnar Solskjaer’s side have were starting to look free-flowing in the final third before the Premier League was suspended, and have taken things to the next level since the restart.