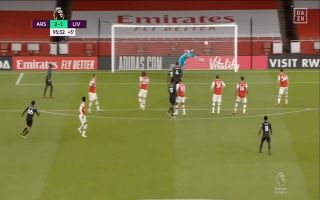 In the final minute of Arsenal’s surprise win against Premier League champions Liverpool, Emiliano Martinez produced a stunning save to ensure that the Gunners came away with all three points.

Trent Alexander-Arnold fired a shot towards goal from 35 yards out, the full-back’s attempt was blocked by Arsenal ace Joe Willock but the ball deflected towards the bottom corner.

Martinez showed his brilliant reflexes and reactions to leap across goal and tip the effort away.

One of the saves of the season by Emi Martinez. I'm a massive fan of Bernd Leno & have said on record that he's been the 3rd best keeper in the league this season.

But Emi has not made things easy at all. Surely the Argentina #1 spot is calling him too.

Martinez has looked solid since becoming Arsenal’s No.1 after Bernd Leno’s serious injury, the ace has steadily proved his worth over the last year.