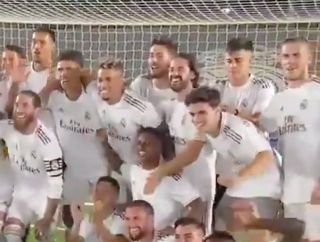 Gareth Bale has played somewhat of a limited part in Real Madrid’s season this year, and so his sheepish title celebrations were perhaps understandable.

The 31-year-old featured just 16 times in the league this campaign, scoring two goals and providing two assists as he struggled to get the nod from Zinedine Zidane to be more involved.

He has made headlines on countless occasions over recent months, and particularly over the past fortnight for his antics on the bench as an unused substitute.

Well, he was certainly involved in celebrations as Real Madrid sealed their 34th title on Thursday night, but as the videos below show, he wasn’t exactly in the thick of it.

Several videos went viral on social media showing the same thing, as Bale’s reluctance to perhaps get too involved in the team’s success was evident.

To be fair, he did play a part on and off the pitch so deserves the success but naturally much more would have been expected from him by Zidane, the fans and all concerned. Still, with a title to celebrate, few will surely be too bothered in the coming days.

What is Bale trying to do here, this guy man ??? pic.twitter.com/nnAV6n8Lxf