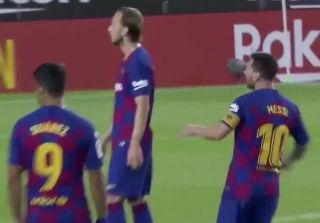 Barcelona fell to a 2-1 defeat to Osasuna at the Camp Nou on Thursday night, and coupled with Real Madrid’s win, their rivals sealed the La Liga title.

With one game left this season, Los Blancos have an unassailable seven-point lead over the Catalan giants, as their superb form since the restart has seen them secure the title.

While they still have the Champions League, it has undoubtedly been a frustrating season for Barcelona and they will be bitterly disappointed to have surrendered a lead and their league crown having been in a decent position to fend off Real Madrid for most of the campaign.

That frustration was arguably summed up by Lionel Messi in midweek, as while his stunning free-kick drew them level just after the hour mark, his reaction said it all about his feelings towards this season and the current mood after their failings since the restart.

The Argentine icon barely even looked after the ball hit the back of the net as he threw his arm up and began to walk away before his teammates started to celebrate with him.

Messi will be determined to salvage something from this season with the Champions League still to come, but it has undoubtedly been a below-par year for the Spanish giants and his frustration after the goal said it all.

I hate doing the body language doctor stuff, but look at his reaction after scoring a free kick goal pic.twitter.com/UI4yMIk1pR