Watford’s sluggishness at the start of this one ended up being their undoing as it allowed West Ham to ease into a two-goal lead in the first 10 minutes.

Though the Hornets gave a better account of themselves in the second half, David Moyes’ side fully deserved their win, and have likely saved themselves from relegation in the process.

Subs: 73’ Fornals off for Haller, 81’ Bowen off for Yarmolenko, ’94 Antonio off for Balbuena

Despite their lowly league positions and what was riding on the outcome of this match, both sides began with an attacking 4-2-3-1 formation.

Watford could easily have gone ahead after just 14 seconds after Ismaila Sarr got in behind the hosts defence, but the ball over the top was just a little too long for him.

It was the Hammers who took the lead on five minutes when Michael Antonio continued his hot-streak by nutmegging Ben Foster in the Hornets’ goal.

The Hammers have a vital early goal against Watford

Within four minutes the lead was doubled thanks to a magnificent diving header from Tomas Soucek, leaving the visitors with it all to do. Jarrod Bowen’s excellent cross meant the chance was put on a plate for Soucek and he couldn’t miss.

The game settled down thereafter, with Watford beginning to get a foothold if not able to carve out any presentable goalscoring chances.

All of their good work was undone once Declan Rice was allowed to create space and fire home a spectacular curling effort on 35, however.

WHAT A STRIKE ??@_DeclanRice pings one in to the far corner from outside the box and West Ham are flying ?

Watford’s shoulders visibly dropped after that with Ben Foster punching the ground in frustration.

Three goals to the good at the break, David Moyes’ side were in the box seat to ease themselves away from the relegation dogfight.

As with the opening 45, the visitors had the first presentable chance, Kabasele’s header dropping agonisingly wide of the upright.

Within a minute, Abdoulaye Doucoure’s shot came back off of the post and straight to Troy Deeney, who made no mistake. With more than 40 minutes to be played, it gave Watford hope.

The game had much more balance about it and as both teams went for the next, crucial goal, it made for excellent entertainment as the action switched from one end to the other consistently.

Sarr’s pace was causing West Ham’s left-hand-side problems and all the while Watford were being offered the incentive to get forward, they looked dangerous.

After replacing Pablo Fornals on 73, Seb Haller almost scored with a first-touch volley, Foster managing to arc himself backwards and tip the ball wide.

Still the visitors took the game to their opponents, getting into good positions time after time. Dogged defending from West Ham kept the score at 3-1.

By injury-time the match had petered out, Watford seeming to accept their fate.

The result, in Mark Noble’s 500th game for the Hammers, means that West Ham are all but safe now, six points clear of relegation with two games to go. 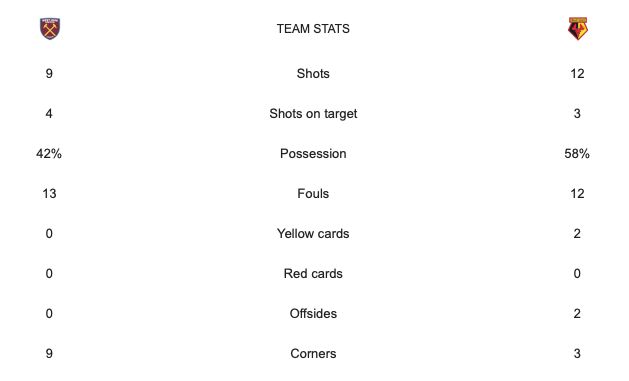 After their heroics at Norwich West Ham came firing out of the blocks and it left Watford, recent conquerors of Liverpool, shell-shocked.

The game was over by half-time, and after a poor season, the Hammers look to have saved themselves at the 11th hour.

They were full value for a win which will disappoint Nigel Pearson. He can have no complaints, however. His side were well beaten.