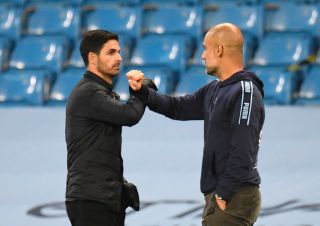 After beating Liverpool in midweek in the Premier League, Arsenal had the small matter of knocking out Manchester City if they wanted to progress to the FA Cup final.

Though Pep Guardiola’s side often dominated possession in their semi-final at Wembley, they lacked a cutting edge up front, and when Pierre-Emerick Aubameyang was given the chance, he didn’t need asking twice, scoring a brace to take down the Citizens.

It was no more than the Gunners deserved after a stunning defensive performance.

The back four were a well-organised unit that all did their jobs to perfection, as did their midfield colleagues.

The unexpected victory over Jurgen Klopp’s side in the same week has left some Arsenal fans salivating over a new, prosperous, era for the north Londoners, and they collectively doffed a cap to Mikel Arteta on social media in the wake of the Spaniard getting his tactics spot on.

Showing what he can do with what he already has in situ surely strengthens his position in terms of asking the Arsenal board for money to buy the players he wants too.

@m8arteta Boss.. Thank you! Thank you for bringing an identity back to the club I love! Thank you for giving the players confidence in themselves to take on big teams and WIN! Now you gotta get @Aubameyang7 to sign that contract! #InArtetaWeTrust #AFC #WeGoingToWembly #COYG

Arteta is a GOAT. He beats Pep and Klopp in a week. Damn!!!

If the board backs Arteta, we really will be

Haven’t been this happy as an arsenal fan for a long time.. Arteta definitely is the guy to take this football club forward if he gets backed in the summer?? #AFC #EmiratesFACup #ARSMCI

Liverpool and Man city in one week…. You have to give Arteta some props