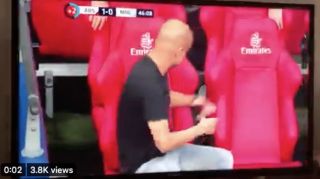 Manchester City had been trying everything to break down a dogged Arsenal defence at Wembley in their FA Cup semi-final.

However, try as they might, it was the Gunners who took the lead thanks to a Pierre-Emerick Aubameyang opportunist strike.

The pressure appeared to be getting to Pep Guardiola who animatedly started chatting away on the City bench… to absolutely nobody it seemed.

Pep has lost it. pic.twitter.com/xRVF5UfiL9