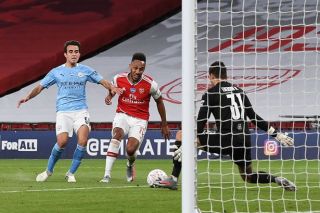 The Gunners stunned City with an impressive performance at Wembley, with Aubameyang hitting a well-taken brace to secure his team’s place in the FA Cup final at the end of this season.

The Gabon international has truly been a world class performer for Arsenal and showed his value again in last night’s big game, though many of the club’s fans will still be sweating over his future.

Aubameyang has just a year left to run on his Arsenal contract and it’s not yet clear if he will remain at the Emirates Stadium.

Arteta, however, spoke about his top scorer after the game and suggested that winning big matches like this, and perhaps going on to win the FA Cup final, could be crucial in persuading him to stay in north London.

“Hopefully it will help him to be more convinced we are going in the right direction,” Arteta said after the game, as quoted by the Metro.

“The way he looks at it when I speak with him, he sounds pretty convinced. But if he can see the success and direction we are taking it is the right one, I think he’ll be more positive about it, yes.”