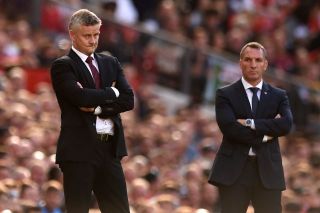 It’s always incredible when two teams are so well matched over the course of the season, as you expect 38 games would be enough to find some way of separating the teams.

Admittedly this scenario might not be highly likely, but it’s very possible that these results could happen and we would see a play off for a Champions League spot:

If the following results happen, both Man Utd and Leicester will have identical points, identical goal difference, identical goals scored AND the same head-to-head record:

If that happened, a play-off would be needed to decide 4th! ? pic.twitter.com/7712gFthS1

The big problem in there is West Ham, but a potential 5-3 scoreline isn’t as far fetched as you might think.

The Hammers are dreadful in defence and should lose the game, but they are handy on the break and have shown they can score goals in an open game.

Whatever happens it looks like the final game against Leicester will be fascinating, as anything but a huge win for Man United over West Ham will leave fourth place up for grabs on the final day.

READ MORE: Video: Watch £80m Harry Maguire at his worst with some clumsy and horrible play for Man United vs Chelsea

Leicester have shown that they are easily caught on the break and that plays into United’s hands, and they would need to really go for it if they need to win and overcome goal difference.

It’s not clear how the Champions League play off would work at this point in terms of venue and how many legs, but it would be fascinating from a neutral point of view.