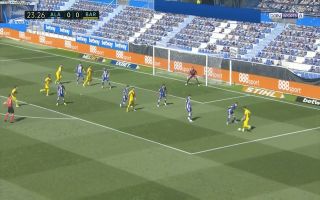 In the 23rd minute of Barcelona’s final La Liga encounter of the season, the Blaugrana were fired into the lead after some fine attacking work.

The ball found its way to Messi on the right-wing and the superstar floated a brilliant cross into the box, Fati showed his maturity with a sharp run to beat his man and get into space.

The 17-year-old remained composed as he volleyed the ball into the back of the net from close range.

Barcelona hit the woodwork three times in the opening stages of the clash, they certainly deserve the lead.

Take a look at the exciting talent’s opener for the Blaugrana below:

Ansu Fati and Lionel Messi combine, and the youngster grabs his 7th LaLiga goal of the season ? pic.twitter.com/6YI3Wn5eAY

Fati has impressed in his breakthrough season for the Blaugrana, should the ace be handed a bigger first-team role from next season onwards?