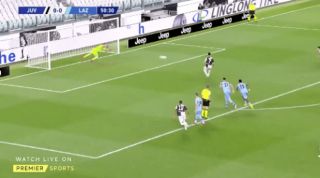 You can’t keep a good man down for long, and Cristiano Ronaldo was once again on the score sheet for Juventus against Lazio.

After VAR had intervened on a handball decision, ensuring the official reversed his initial free-kick and gave a penalty, the stage was set for the Portuguese.

Although Lazio’s keeper guessed correctly, the pace of Ronaldo’s spot-kick delivery was enough to hand him his 50th goal for the Bianconeri.

Juve lead as Cristiano Ronaldo converts from the spot for his 50th Serie A goal! ??

Juventus were awarded the penalty after a VAR review, and their star man made no mistake from there ? pic.twitter.com/WMphek7VoY