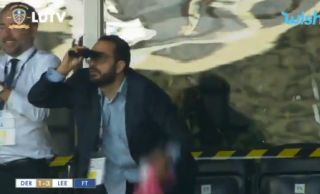 Watch below as Orta can be seen celebrating with a pair of binoculars in reference to the ‘spygate’ scandal that landed the club in trouble last season and sparked something of a rivalry between the two sides.

Leeds boss Bielsa sent someone to spy on Derby training last season, as reported at the time by Goal and others, and it saw the club hit with a fine, while Derby ended up having the last laugh on that occasion as they beat Leeds in the playoff semi-final.

The Rams ended up losing that final, however, whereas Leeds have this year secured automatic promotion to the Premier League, with Orta clearly in the mood to celebrate and rub it in to Derby’s faces!