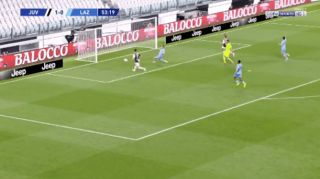 Juventus were already one goal to the good against Lazio after Cristiano Ronaldo had fired the Bianconeri ahead from the penalty spot.

The opener was his 50th goal for the Serie A outfit, and he quickly followed that with his 51st, as Juve stunned their opponents with a rapid breakaway.

Lazio were pressuring the hosts but left themselves far too light at the back.

Ronaldo and Paulo Dybala led the charge, and it was a simple pass from the latter that saw the former slide the ball into an empty net.