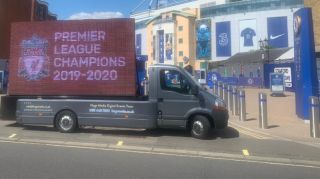 Liverpool fans have continued their quest to be as ‘unbearable’ as possible after finally getting their hands on the Premier League title this season.

See below as the Reds prepare for tomorrow night’s big game against Chelsea with some fans parking a ‘CHAMPIONS’ van outside Stamford Bridge.

Tomorrow’s game isn’t even being played at Chelsea’s stadium, but at Anfield, though clearly this lot were in the mood to wind up some Blues supporters…

Liverpool will get the chance to lift the Premier League trophy at last tomorrow night, ending their 30-year wait for the title.

Jurgen Klopp’s side will no doubt hope to cap off this season with another win at Anfield, following a slight dip in form since they were confirmed as champions.