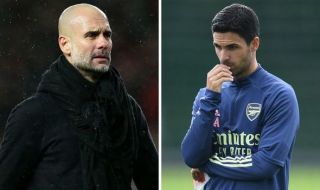 Manchester City manager Pep Guardiola has aimed a somewhat unexpected dig at rivals Arsenal, saying he doesn’t have a lot of respect for the way they conduct themselves off the pitch.

The Gunners beat City 2-0 in the FA Cup semi-final over the weekend in what was something of a surprise result, and Guardiola has said he respects them as opponents on the pitch.

MORE: Arsenal flop to resurrect his career in the Spanish top flight

However, the City boss is also quoted by BBC Sport as criticising Arsenal’s conduct off the pitch, which the report suggests could be down to the north London giants’ role in trying to get the club banned from the Champions League recently, before City eventually won their appeal with the Court of Arbitration for Sport (CAS).

“Opponents always deserve my respect and credit. I have all the respect for what Arsenal are on the pitch, not much off the pitch – but on the pitch, a lot,” Guardiola said.

It may be that Guardiola is still bitter about Arsenal leading the efforts along with other Premier League clubs to punish City, while BBC Sport also note that AFC may have angered their rivals with their approach for Mikel Arteta earlier this season.

Arteta was Guardiola’s assistant at the Etihad Stadium before being poached to replace Unai Emery at the Emirates Stadium in December.