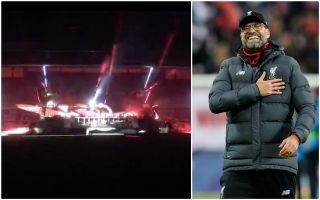 Some leaked footage that is doing the rounds on social media appears to offer a first look at what Liverpool’s celebrations will be like when they lift the Premier League title tomorrow.

The Reds face Chelsea at Anfield tomorrow night, but with the club’s first league title in 30 years already secured, all eyes will be on how Jurgen Klopp’s side celebrate their historic feat.

The clip shows a full-on lights show as well as pyrotechnics on a platform that appears to be built into the Reds’ fierce Kop stand.

Based off the footage, Coldplay’s ‘Sky Full of Stars’ will be playing when skipper Jordan Henderson lifts the top-flight title.

This Is Anfield report that Liverpool legend Sir Kenny Dalglish is set to present Henderson with the trophy in what will certainly be an emotional moment for fans, players and staff.

Here’s a better look at what the stage looks like.