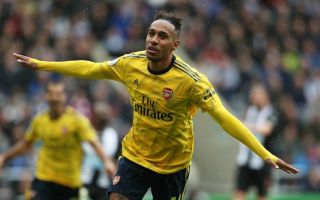 Arsenal striker Pierre-Emerick Aubameyang could reportedly be prepared to stay with the club for one more season in a surprise development.

Rather than force an exit this summer or extend his deal with the Gunners, it may well be that Aubameyang will seek to put his future in his own hands.

MORE: Arsenal midfield target grateful after being compared to Gunners “legend” amid links

This is because, according to Sky Sports, as cited by Sport, the Gabon international is hoping for a dream transfer to Barcelona on a free, in what will go down as mixed news for Arsenal fans.

On one hand, this guarantees that Aubameyang stays at the Emirates Stadium for one more season, which some will surely feel satisfied with as the 31-year-old may well soon approach a decline anyway.

That said, it’s a blow for a club who could do with the money raised from the sale of a player of this calibre.

Arsenal aren’t in as strong as a financial situation as many of their rivals, so could perhaps do with funds from Aubameyang’s sale now, in order to help them land a top class replacement.

And yet, it could still be argued that, given Aubameyang is in the final year of his contract anyway, the club might not realistically make enough money from letting him go now as they might have if he’d had longer to go on his deal, meaning finding anyone else as good as him for that kind of money would be a near-impossible job.

AFC supporters will just have to hope there can be progress on sorting out a new contract for their top scorer to avoid this potential lose-lose scenario.