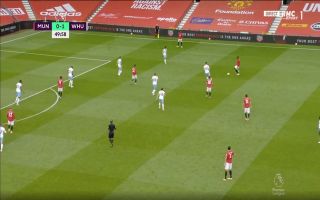 Less than five minutes into the second-half of Manchester United’s clash with West Ham, the Red Devils drew level after a sumptuous team move.

Paul Pogba, who was at fault for the Red Devils falling the behind after conceding a bizarre penalty, sparked the opportunity by playing the ball into Mason Greenwood.

The 18-year-old knocked the ball onto Anthony Martial, the Frenchman got away from the crowded area before exchanging passes with Greenwood once more.

The United duo showed their crafty side by getting the ball around the pressure, leaving Greenwood to pick up the ball just inside the area and fire a drilled left-footed strike into the bottom corner.

Take a look at the wonderkid’s strike below:

Mason Greenwood marks his 50th #MUFC appearance with the equaliser!

Can they find the winner?

Greenwood has continued to showcase his killer instinct in front of goal with this superb effort, the ace is really making a solid case to break into the England senior squad when international football resumes.