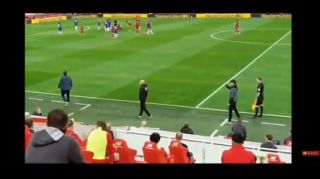 The new Premier League champions beat Chelsea 5-3 at Anfield, with Lampard clearly aggrieved as his side were dealt another blow in the race for a top four spot…

Frank having none of it ?? pic.twitter.com/rvWpuIVIS9

Watch the video above as Lampard can be heard being very rude indeed to his opposite number, telling him to “f*** off” at one point.

Klopp won’t be too bothered, however, as the German tactician got his hands on the Premier League trophy after the game, making him the first Liverpool manager in 30 years to do so.