The experienced Reds midfielder did not play the biggest role in this season’s title success, but was of course still involved as club captain Jordan Henderson finally got his hands on the trophy after last night’s 5-3 win over Chelsea.

MORE: Gary Neville isn’t worried about Liverpool dominating in the same way his Man United side did

Lallana played only 15 league games for Liverpool this term, of which only three were starts, but the 32-year-old was initially a hugely important part of the Jurgen Klopp project.

Now heading towards the end of his contract, Lallana earned special tributes from Liverpool supporters on Reddit and Twitter.

See below for some examples of LFC supporters praising their departing star, hailing him as a key player in the early days of Klopp’s reign due to his playing style and great work ethic… 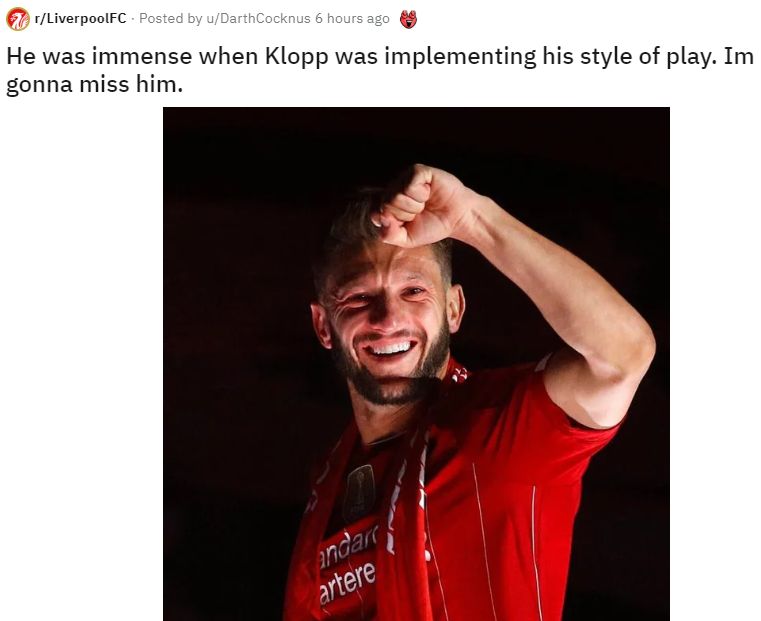 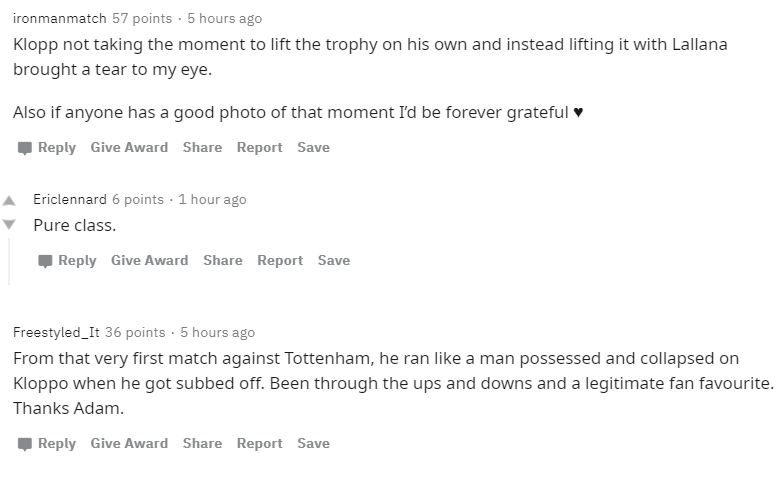 Here’s some more reaction from Liverpool fans on Twitter, in what is quite a moving show of love for something of an unsung hero at Anfield…

A special tribute to this man Adam Lallana here
He was our best player during Klopp’s initial years and has played such a vital role throughout.
Best of luck Adam, thanks for the memories ?? @officialAL20 pic.twitter.com/MzVk6xgPUx

When Klopp took over, he was the player who instigated the press, bought into everything!

I hope Lallana is remembered properly by our fans.

An intelligent footballer with two good feet who loves to graft.

Wherever he ends up he'll be immense.

I miss lallana already man, hopefully he starts against Newcastle. He was immense for us when we were not so good before injuries ripped him off.

Lallana we are really going to miss to you too…what a loyal member of klopp's project. https://t.co/FisOWMx5l6

Thank you very much Lallana.

I really wish the injury in 16/17 never came. But, your contribution, your passion for the club are always incredible.

Good luck for your next journey #YNWA https://t.co/vDVUF3TPLE

I, for one, am very happy for Adam Lallana. He's given us years of service and has been professional throughout his spell at Anfield. This part of his career deserved to end in success. Crucially, he also bagged that all-important goal at OT. Vital to our unprecedented form. https://t.co/M5S50Hnodt

Thank you for everything Adam Lallana! What a player on his day, one of the most elegant midfielder I've ever seen! YNWA ???? pic.twitter.com/ntoXmP6byO

Wanted him at LFC ever since I saw him at Soton. On his day what a player. Glad he won the biggest trophies during his time here. All the best Adam Lallana! https://t.co/Ak9xWY68FH