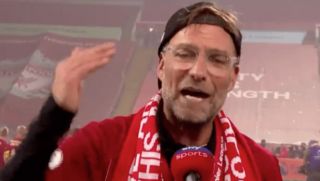 Each and every time a trophy has been won under his tutelage by the Reds, he wants to enjoy the moment as much as each and every person connected with and to the club… and he isn’t embarrassed to show it.

In many respects it brings him closer to those who help pay his wages, and in this day and age when so many involved in football are aloof and untouchable, Klopp is very much a man of the people.

After Liverpool were finally handed the Premier League trophy on Wednesday evening, he had a message for the fans.

“Drink what you want, but you have to prepare for a party I don’t know when… this bulls**t virus is gone!”

“Drink what you want, but you have to prepare for a party I don’t know when!” ?