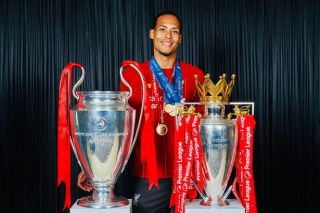 Celebrity Manchester United fan John Bradley has aimed a brutal dig at Liverpool for one detail of their recent trophy celebrations.

As you’ll no doubt be aware of by now, the Reds have won the Premier League title this season, ending a 30-year title drought, so it’s unsurprising they’re in the mood to celebrate.

Still, Liverpool are out of the Champions League following their defeat to Atletico Madrid back in March, and so Bradley has one bone of contention about the club’s players continuing to pose with the European Cup.

Liverpool may still technically be the reigning European Champions until there’s a new winner at the end of this season, but the Game of Thrones actor has a good point about players posing with trophies from two different seasons at the same time.

As quoted by the Daily Mirror, Bradley, a Man Utd supporter, said: “Imagine in 2009 when we won the PL but lost the CL final our players had carried on posing for photos with both trophies?? They’re something else.

“As soon as the final whistle blew against Athletico (sic) they had no right to pose with the CL anymore. Anybody else would be embarrassed.”

Many Red Devils fans will probably agree with this, but others might argue that it’s still worth celebrating a remarkable 12 months for Liverpool, even if not all the trophies won were in the precise same campaign.

Pep Guardiola’s Barcelona are often lauded for their ‘sextuple’, even though those trophies were also split across two seasons, with Barca winning the treble in 2008/09 before adding the Spanish Super Cup, UEFA Super Cup and Club World Cup in the first half of the 2009/10 season.