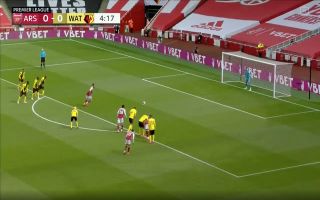 After less than two minutes into Arsenal’s clash against Watford, VAR was called into action to judge an incident involving Craig Dawson and Alexandre Lacazette.

With Pierre-Emerick Aubameyang floating a ball into the box, Dawson sent Alexandre Lacazette crashing to the floor with an elbow into the back of the forward’s head.

VAR awarded the Gunners a spot-kick and Aubameyang made no mistake as he sent Ben Foster the wrong way with a brilliant penalty tucked into the bottom corner.

Take a look at the incident that led to the spot-kick and the conversion below:

VAR awards a penalty to Arsenal less than 5 minutes in! ?

It's a nightmare start for Watford – was it the correct decision? ?

Watford need to rescue some points from the clash to avoid relegation, they could escape even if they lose if Aston Villa were to lose by two more goals than they do.