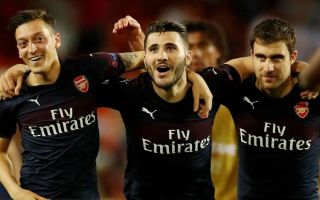 On paper a squad overhaul sounds so simple – you just sell all the players that you don’t want anymore, before using that money to sign a team of stars that will take you to the next level.

The problem there is that you can’t force players to leave and often nobody will show any interest in someone you don’t want, so it leaves a manager with a decision to make.

You can make them train alone and try to force them out that way, but it won’t go down well if they are well thought of and have friends in the team.

Football.London have indicated that’s the dilemma that Mikel Arteta currently has with Sokratis, after telling the Greek defender that he doesn’t feature in his plans for next season.

That should be a clear sign for the Greek defender that it’s time to move on, but the report suggests that he has no intention of leaving and he plans to stay for the duration of his contract.

Interestingly they indicate that he won’t be frozen out like Guendouzi or Ozil, mainly because of his dedication and hard work on the training pitch.

At least that sounds like he’s got the right mindset and there’s a chance he could change Arteta’s mind if he does well in training, but it won’t be a surprise if he’s linked with various different clubs in the next few weeks.