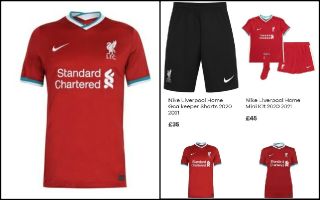 UK sportswear retailer Lovell Soccer will be kicking themselves this morning after they leaked Liverpool’s new home kit for next season, which will be the first that’s made by powerhouses Nike.

As per the Echo, Liverpool’s deal with Nike officially begins on August 1, it’s reportedly worth a guaranteed £30m-a-year.

Whilst that fee may seem lower in comparison to other top clubs, Nike are also offering the Reds 20% of all merchandise sales, which the Echo claim will make the deal worth in excess of £80m per annum.

Lovell Soccer uploaded some new items – including the 202021 home kit to their website, before they realised their mistake, some Liverpool fans already captured the proof and shared it on social media.

The adult mens and women’s kits carry a price tag of £70 each, with the mini kit being listed at £45 and the junior shirt at £55.

For those that are Alisson enthusiasts, next season’s adult goalkeeper shorts are priced at £35.

The strip is quite different to anything we’ve seen the Reds don before, the usual red is surrounded by a green and white trim on the sleeves and neck, as well as white detailing for logos and sponsors.