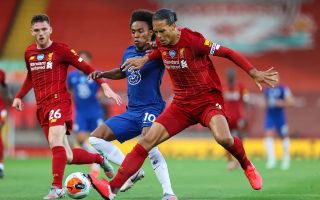 The situation with Willian’s contract at Chelsea has been allowed to drag on for a while now, so you have to think that Chelsea aren’t going to give him what he wants.

It’s a tough spot for them because he’s currently one of their best players and he’s still playing brilliantly, but he does turn 32 next month and that form could disappear at any time.

A recent report from Sky Sports has indicated that Chelsea have made him another offer to stay, but there’s some bad news in this for any fans that want him to stay.

READ MORE: These fans are convinced that goalkeeper has just dropped a Chelsea transfer hint on Twitter

They indicate that Barcelona have also made a bid, and they are happy to offer him the three year contract that’s been the sticking point in his negotiations with Chelsea.

They also go on to say that David Beckham’s Inter Miami franchise have offered him a very lucrative deal, but no decision is expected until after the FA Cup final.

They also point out that Arsenal have shown an interest in the past, but there’s no sign that they’ve made an offer at this point.

They don’t give any detail about Chelsea’s offer so it doesn’t sound like they’ve met his demands, so it will be interesting to see where he goes.