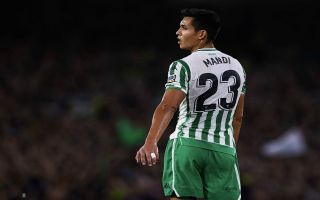 It’s clear that Liverpool’s first team won’t be improved without spending some serious money, so it looks like Klopp is going to trust his current players and freshen up the squad instead.

They’ve recently lost Dejan Lovren and Nathaniel Clyne so the defence does need at least one addition, and signing someone who can play anywhere across the back line looks like a clever move.

Spanish outlet COPE have reported that Liverpool have made an offer of €10m to sign Real Betis defender Aissa Mandi.

They go on to suggest that Real Betis aren’t planning to hold out for his release clause of €30m, and this offer could be accepted due to his contract expiring at the end of next season.

It’s worth pointing out that there’s nothing to suggest that an agreement has been reached at this point, but signing a player like Mandi would make sense.

He’s a dominant centre back who’s comfortable on the ball and also looks happy in either full back spot, so his versatility would be handy and it would solve the problem of finding cover at full backs.

Alexander-Arnold and Robertson will always start when they’re fit so no specialist full back will be guaranteed a lot of playing time, so signing a versatile defender will provide cover.

There’s no sign of any other interest from other clubs, so Liverpool fans should keep an eye on this in the next few days to see how it develops.