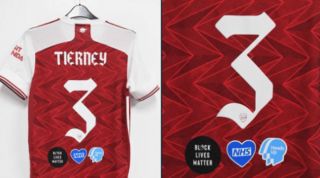 Saturday sees the FA Cup final bring the curtain down on the domestic season in England, and the showpiece will showcase two bright, attacking teams in Arsenal and Chelsea.

Both London sides will be expected to wear their new home shirts for the grand old occasion, though there’s one difference to Arsenal’s shirts and it’s fair to say that their supporters aren’t best pleased about it.

Having three badges on the reverse – Black Lives Matter, NHS and Heads Up – seemingly hasn’t been met with any opposition at all.

However, the special font that the club have decided to use has some of the Gunners fraternity hot under the collar.

A neat, olde English style, it really hasn’t gone down well with some suggesting it looks like something that William Shakespeare has designed.

Who designed the font, William Shakespeare? Absolute disgrace. No chance we win on Saturday.

Did William Shakespeare design the font???

One even suggested on Twitter that Mikel Arteta’s side were almost certainly going to lose the final against their west London counterparts because of the change in style.

Maybe they forgot that the old Arsenal crest had the club name written in exactly the same style, so there is a very obvious precedent.