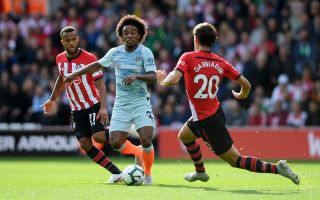 In some ways it could be a good thing for a footballer to become a free agent in their final prime years, but it could also present a big problem in contract talks.

Willian is finding that at Chelsea – He’s still playing at a top level but he also turns 33 this year, so it’s hard to see any club giving him a lucrative long term deal.

Sky Sports reported on his situation last night, and it sounds like the problem at Chelsea is they only want to give him a two year deal, but the Brazilian is holding out for a third year.

READ MORE: Barcelona are trying to force star to leave by telling him that a youngster will replace him next season

That report also suggested that Barcelona had offered him a contract and they were prepared to meet those demands, but a more recent report from Mundo Deportivo has gone against that.

They state that they’ve confirmed with Barcelona sources that this isn’t true, and although the club admire him as a player, he’s too old and they don’t want to sign him for that reason.

It would be a surprise if he stays at Chelsea and Barcelona don’t have an interest anymore, so it will be interesting to see where he actually ends up next season.