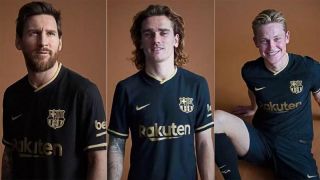 Barcelona have unveiled their new away kit for the 2020/21 campaign and it has been met with a mixed reaction on social media given similarities to another kit.

It was a disappointing domestic campaign for the Catalan giants this year as they were dethroned by rivals Real Madrid in La Liga, but they could still end on a high in the Champions League.

Nevertheless, changes will surely be needed ahead of next season to ensure that they’re competitive across multiple fronts, and they’ll have a new look away from home as they try to wrestle back their crown.

As seen in the images below, the club have dropped their new away kit for next season, going for a slick look with a black top and gold trim.

However, not everyone was impressed with it and particularly Nike, as they drew similarities between this and the kit for the Kaizer Chiefs, and there is a resemblance based on the images in the tweets below.

Nevertheless, you could say that about many kits these days given the manufacturers go for a similar look across the board and draw inspiration from previous kits, and so if Barcelona are successful next season, the kit surely won’t be on anyone’s mind as the players look sharp in it regardless.

Barcelona have dropped their new away kit for next season ? pic.twitter.com/6llyiDgx2N

I think I’ve seen this kit somewhere before… Hmm? pic.twitter.com/dCtyeCodkc

This Barcelona kit looks familiar to the one of the best team in Africa mus? pic.twitter.com/f8SE9z24Yo