According to Goal, Chelsea star Antonio Rudiger has opened up about the ‘agent’ nickname he’s been given recently after playing a part in convincing Timo Werner to join the Blues.

Rudiger was also quizzed about the west London outfit’s possible swoop for another Germany international teammate in starlet Kai Havertz.

The centre-back expressed ‘I did what I had to do’ when talking about the role he played in Werner’s move to Stamford Bridge, the prolific forward has joined the Blues for a fee of £47.5m, as per Goal.

Rudiger convincing his former Stuttgart pal and international teammate to join Frank Lampard’s side has won him the nickname ‘Agent Rudiger’ with the club’s fans on social media.

Here’s Rudiger’s subtle response when asked about the Havertz rumours:

“Has he been linked with us? He is a great talent and he had a very good season. He is also very young and we will see what happens [with his future].” 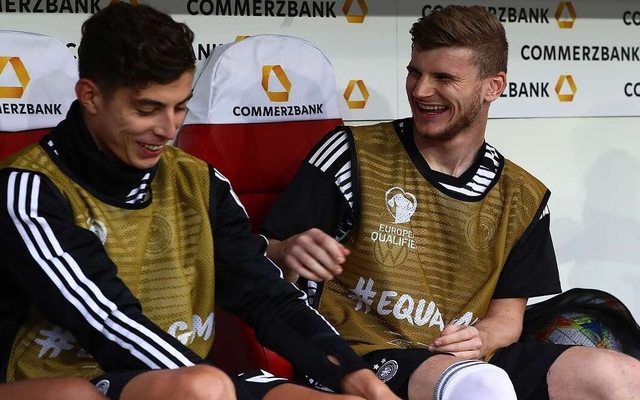 Chelsea could have two of German football’s biggest talents ahead of next season.

Here’s what Rudiger had to say on the role he played in Chelsea signing Werner:

“My friends told me about it (about the nickname] but I just tried to help out because everyone knows and can read about how we played together.”

“There’s a bond, so I just did what I had to do. We spoke a lot during the lockdown and I have known him for a long time through playing in the national team and at Stuttgart together.”

“It’s nice to see how his career has gone and how he developed every year, getting better and scoring more goals and getting more assists.”

“I am very happy for him that he has now managed to take that step like me to leave Germany and come to the UK.”

“I think it is a good sign if you can get people like him in the club because he is also still young but he showed that he can score goals and I hope that he can do the same here that he did in Germany.”

Rudiger also lifted the lid on what a young Werner was like when he broke into Stuttgart’s team:

“At the beginning, it was not easy for him because he was only 17 when he came into the squad and he was a little kid, very thin, but now, over time, I think he went to the gym because he is bigger!

“Each year you see how good his statistics are. Every year he scored more than the last and his qualities are in scoring goals.”

“I hope he can do that for us but the most important thing is that he stays healthy and he adapts to many different things.”

“I was one of the people who helped convince him to come here so it is also my job to help him [settle in]. Of course, we speak the same language but he does speak very good English too.”

“The thing is, with this job, and as a team, we all have to help him. We will do that for him.”

With Werner now recruited, Chelsea have two Germany internationals to try and convince Havertz to join this summer, the attacker clearly wants to and he’s let on as much with his social media activity.

Rudiger has endured a difficult season and it’s nice to see that the defender is still full of positivity, he went above and beyond to help seal the deal for Werner and may even do so for Havertz.