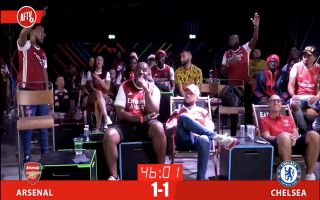 The AFTV (formerly known as Arsenal Fan TV) mob and their hypocritical double standards are at it again.

Today’s FA Cup final sees Arsenal in action again against domestic rivals Chelsea in a game which is finely poised currently at 2-1 to the Arsenal thanks to a brace from star-man Pierre-Emerick Aubameyang.

However, the game didn’t get off to a perfect start for Mikael Arteta’s Arsenal after Chelsea forward Christian Pulisic cooly tucked home the game’s opener after just five minutes.

Sadly for the young American attacker, his first English cup final was cut short early in the second-half after he he suffered what appeared to be a hamstring injury.

Obviously the AFTV mob had forgotten their previous anguish and instead opted to revel in Pulisic’s misery this afternoon by mocking their rival’s nasty looking injury.

Credit to DT and Robbie here.

Absolutely DISGUSTING that Lee and others from @AFTVMedia sre cheering the injury of Pulisic. Terrible decorum and etiquette. #FACupFinal #ArsvChe #AFTV pic.twitter.com/UfVfEZEHH0

There was outcry back in June when Brighton pipped the Gunners to all three points in a game which saw Gulls forward Neil Maupay clinch a 95th minute winner.

Earlier in the same game Maupay had collided with Gunners goalkeeper Bernd Leno which resulted in the keeper having to be stretchered off.

Despite the Brighton forward issuing an apology after the game stating he did not intend to cause his counterpart any harm, the sub-standard London fan base wasted no time in demonising the forward, brandishing him a cheat.

?? “Maupay, you’re a cheat and I hope Brighton get relegated!” (An Angry Ty)

? Check out the full interview on the channel now!https://t.co/uUQtwrNeKa#BHAARS #Arsenal #AFC #AFTV pic.twitter.com/1CyIzE0IFN