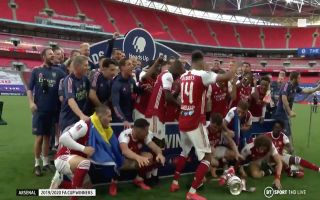 He’d been the match winner for Arsenal in the semi-final with two goals, and Pierre-Emerick Aubameyang did the same in the FA Cup final to earn the Gunners a 2-1 win over Chelsea.

What happened after the match will be remembered just as much as his two goals, however.

An FA Cup trophy lift with a difference saw the Gabonese approach the plinth on which the trophy was standing on.

After wrestling with taking the iconic silverware off of it in the first instance, Aubameyang then proceeded to drop it on the Wembley turf to the amusement and shock of his team-mates.