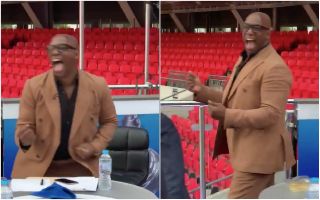 Chelsea and Arsenal are set to go into the break at the empty Wembley Stadium all square as this season’s FA Cup final is finely poised in the balance at 1-1.

However, just 20 minutes later domestic rivals Arsenal had dragged themselves back level through star talisman Pierre-Emerick Aubameyang who stepped up to smash home a penalty kick after Chelsea defender Cesar Azpilicueta conceded a foul in the Blues’ box.

Arsenal legend Ian Wright was filmed celebrating after Aubameyang equalised in a reaction which perfectly displays his everlasting passion for the Gunners.

‘Wrighty’ is just one of those characters that everyone loves, great to see him enjoying himself.