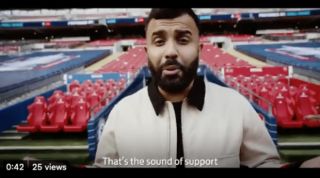 Ahead of the FA Cup final between Arsenal and Chelsea, there was a moment of reflection for the two teams and those inside Wembley Stadium.

Given that this season’s showpiece has come to be known as the HeadsUp cup final, ensuring that the conversation relating to mental health continues, the one minute video entitled ‘The Sound of Support’ gave a nod to those struggling as well as paying tribute to the NHS and various services.

Unusually played directly before the two teams kicked-off, the video would surely have allowed both to settle before going to war.

Presenting: The Sound Of Support