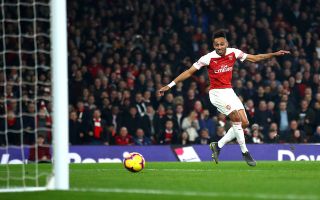 Arsenal manager Mikel Arteta is hoping the contract situation of star striker Pierre-Emerick Aubameyang can be resolved this week as the club look to tie the forward down on a new three year deal worth £40m.

According to Evening Standard , the Spanish boss is keen to resolve Aubameyang’s soon to expire contract before laying out future transfer plans.

It is understood that a new three year contract will cost the Gunners £40m as the forward is set for a hefty pay-rise as the club offer the Gabonese forward £250k a-week.

Aubameyang has been Arsenal’s brightest spark this season scoring 29 goals in 44 appearances in all competitions with his most crucial contributions coming in Arsenal’s FA Cup final against Chelsea last weekend.

Speaking on Aubameyang’s future, as quoted by Evening Standard, Arteta said: “I think he wants to stay and it is just about getting the deal done.

“He is loved by everybody at the club. Hopefully he can continue with us.”

It is believed that Arteta views the potential securing of his star-man’s future as important as a new signing especially given how the Gunners failed to qualify for the financially lucrative Champions League next season.

Failure to qualify in Europe’s most illustrious competition would suggest the club’s transfer budget has been significantly trimmed, therefore, convincing one of the league’s most prolific strikers could very well be the priority.