Chelsea are reportedly expected to clinch the transfer of Brighton defender Lewis Dunk this summer.

A Brighton in-the-know account claims Dunk to Chelsea is on the cards in this transfer window, with the Blues certainly in need of a new top signing at centre-back.

Dunk has impressed in the Premier League in recent times, and has previously been linked with the likes of Liverpool and Leicester City. 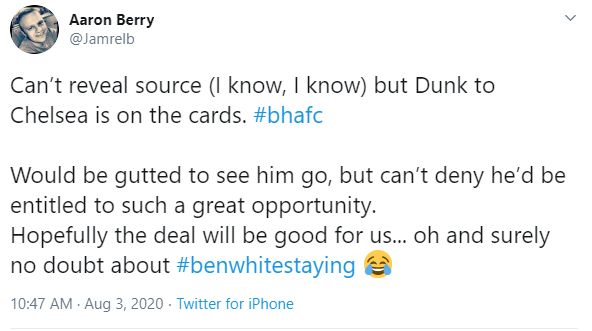 Chelsea now also need to strengthen at the back this summer, with the west London giants just beaten 2-1 by Arsenal in the FA Cup final, having also only narrowly scraped into the top four.

Dunk could be an upgrade on the likes of Antonio Rudiger, Kurt Zouma and Andreas Christensen, none of whom have really been reliable this term.

PSG star’s mansion raided by gang who escape with £2.5m worth of valuables
Chelsea set to finalise a deal to sign Brighton star
Paul Robinson says Newcastle may let star player leave due to FFP

The 28-year-old would also most likely not be too expensive either, with Chelsea already splashing the cash on the likes of Timo Werner and Hakim Ziyech this summer, with Kai Havertz also expected to come in next.

That could mean there’s less to spend on defenders, but Dunk could well be one of the bargains of the summer.