Manchester United are reportedly closing in on the transfer of Jadon Sancho, while Aston Villa star Jack Grealish could be next to come in at Old Trafford.

The Sancho transfer saga continues to dominate headlines, with the Daily Mirror among a number of sources now suggesting a deal is close to completion.

United are also tipped to consider a swoop for Grealish later in the summer, though they’re ready to be patient with a move, according to the Daily Mail.

The duo could be game-changers for the Red Devils, with Ole Gunnar Solskjaer building a promising young side at Old Trafford, though he could still do with talents like this to add some spark and creativity to his squad.

If both moves go through, it could really turn Man Utd into a stylish attacking outfit next season, and we’ve had one look at how the team could line up with their big new additions… 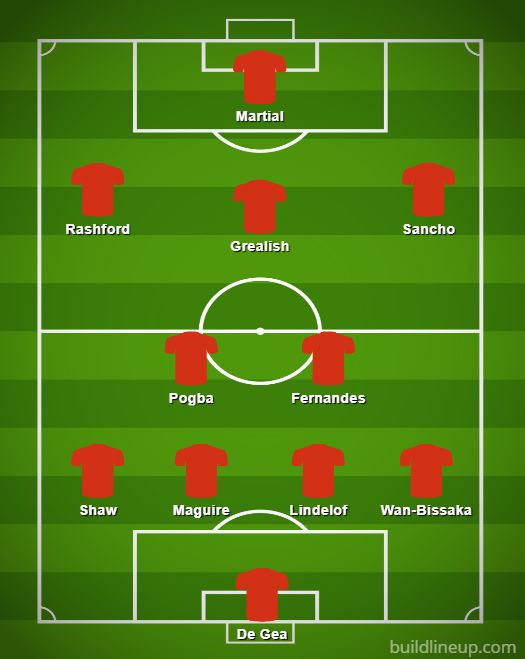 This is a very strong line up that suggests United could really become contenders for major trophies once again, even if signings are still needed in other areas.

Recent signings like Alexis Sanchez and Daniel James have flopped, however, while Jesse Lingard and Juan Mata have not performed at a high enough standard for some time, so Sancho and Grealish are major upgrades in that department.

Nothing changes after Ronaldo’s return as Mendes will do everything he can to complete Old Trafford exit
Exclusive: Agent refuses to rule out late Chelsea move for “very expensive” Man United star
We must avoid England’s Lionesses’ Euros win becoming another London 2012, why Southgate will find Qatar tough and Boehly may still go after Ronaldo

A new centre-back and goalkeeper would still perhaps be useful for MUFC, while fans may also question how Sancho’s arrival impacts wonderkid Mason Greenwood.

The teenage forward has enjoyed a superb season for United, and one imagines he’ll still rotate with Marcus Rashford and Anthony Martial for a place in that front four next season.