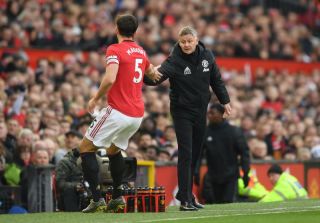 Ahead of his side’s Europa League restart on Wednesday, Manchester United boss Ole Gunnar Solskjaer refused to rule out the possibility of bringing in a new defensive addition this summer.

United’s defensive issues are well documented and with several first-team defenders set to depart this summer, Solskjaer is undoubtedly cautious to rule out adding some depth to his back-line.

Despite there being no speculation surrounding Axel Tuanzebe, Phil Jones and Eric Bailly’s United futures, all three of the centre-backs have been plagued with injuries and their availability is often unable to be relied upon.

Elsewhere, 30-year-old Chris Smalling, who has endured somewhat of a reemergence of form during his time on-loan with Italian side Roma is the subject of mounting speculation that his long-term future lies away from Old Trafford, despite recently returning to the club, as per ManUtd.com.

Another defensive departure almost certain to happen is Marcos Rojo after his agent Jonathan Barnett said he thinks it’s ‘obvious’ that the Argentinian will move on this summer, as per Stretty News.

However, speaking in today’s press conference, addressing the question surrounding the possibility of seeing United delve into the market for a defender, as quoted by Manchester Evening News, Solskjaer said: “We’re always looking to improve the team and the squad.

“I think we’ve been very, very solid at the back. Sometimes you might be exposed [when a player gets] in behind when you’re pressing as high as we have done. We decided we’re going to be a high pressing time when we can and if you don’t take risks you won’t improve.

“Once in a while we’ve been found some space behind us but I’ve not been concerned about it, no.”