Jadon Sancho to Manchester United transfer rumours continue to do the rounds, with a number of leading journalists providing updates on the potential deal.

As seen in the tweets below, it sounds like Sancho has more or less agreed personal terms on a move to Old Trafford.

However, the catch seems to be that a fee with Borussia Dortmund is yet to be finalised, and that’s where there could be issues for Man Utd… 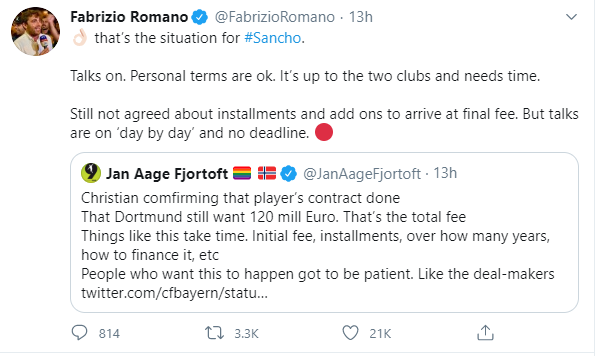 If Sancho is too expensive, which seems fairly plausible in this market, we’ve put together five similar players we think could be superb signings for the Red Devils.

These are not names currently being linked strongly with Ole Gunnar Solskjaer’s side, but in our opinion would be other leading options for the club to consider if a deal can’t be done for Sancho…

With 20 goals and 11 assists in all competitions this season, Serge Gnabry has been a superb performer for Bayern Munich and would clearly give United something similar to what they’re looking for in Sancho.

The Germany international has come a long way since struggling at Arsenal as a youngster, with the 25-year-old now one of the finest attacking players in Europe, and with the potential to keep on improving as he should reach his peak in the next few years.

Bayern surely won’t let Gnabry go easily, but if MUFC have money to burn for Sancho, they might find that a not dissimilar, but perhaps more reasonable fee could be enough for this in-form winger.

Long tipped as a real wonderkid, Leon Bailey’s recent form may have taken a bit of a hit, but he’s still 22 years of age so has time to improve and fulfil his enormous potential.

The Jamaica international has generally done well in his time with Bayer Leverkusen, playing a variety of roles on either flank or even as a more central attacker.

Bailey might not be in the same league as Sancho, but Ole Gunnar Solskjaer has shown he can improve talented attacking players like Anthony Martial, so could perhaps do a job with Bailey as well.

A bit of a late bloomer, Adama Traore has really found his feet in this Wolves team and has shown he could surely shine for an even bigger club.

The Spanish wide-man is incredibly quick and strong, with his trickery on the ball making him a nightmare for Premier League defenders in the season just gone.

Man Utd would surely find Traore improves their side if he makes the move to Old Trafford, and he’d likely be a great deal cheaper than Sancho.