According to the Sun, Ole Gunnar Solskjaer is set to hand promising defender Teden Mengi his first-team debut for Manchester United in tonight’s Europa League clash against minnows LASK.

Wholesale changes are expected tonight with the Red Devils boasting a 5-0 lead heading into the second-leg, this appears to have opened up the opportunity for Mengi to impress.

The Sun report that centre-back Mengi has impressed in training with the first-team and will have the chance to make his bow as a result of Phil Jones and Axel Tuanzebe sidelined.

It’s added that usual starters Harry Maguire and Victor Lindelof may be rested ahead of the quarter-final tie on Monday, with all later stages of the competition taking place on neutral ground in Germany.

Mengi was on the bench for the first-team back in November for the Europa League clash encounter against Astana.

The Sun report that the the 18-year-old’s squad number has also been changed from 71 to 43, with one of Mengi’s best attributes being his electric pace.

It’s claimed that the centre-back recorded the fourth-quickest speed after testing when the Red Devils geared up for the restart, Mengi was only behind Jesse Lingard, Tuanzebe and Dan James in the ranks.

Mengi captained the Under-18s this season whilst also starring for the Under-23s, the Sun add that the England Under-18s talent only joined the Manchester outfit in 2018.

Mengi hinted at his debut with this social media post last month. 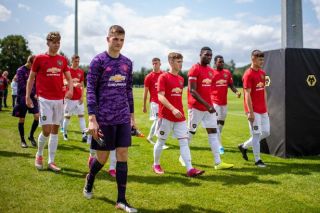