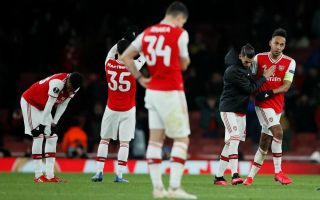 Arsenal players have reportedly been left angry and will seek to hold talks with the club over their decision to axe 55 members of staff.

This move was announced by the club in an official statement on their website yesterday, and it’s fair to say it didn’t go down well as people reacted to the news on Twitter.

According to The Athletic, Arsenal’s players weren’t impressed either, with additional information in a tweet from David Ornstein claiming they were “angry” after they initially felt their decision to take a pay cut would mean protecting jobs elsewhere at the Emirates Stadium…

Arsenal players not happy with 55 staff being made redundant. They agreed 12.5% wage cut in April after receiving assurance nobody would lose jobs. Yesterday’s news left squad angry & they plan to raise it with #AFC bosses. With @gunnerblog @TheAthleticUK https://t.co/OWotcinKhh

Arsenal certainly haven’t covered themselves in glory here, and it will be disappointing to many of their fans as it comes so soon after their impressive FA Cup final win over Chelsea last weekend.

The Gunners so often seem to take one step forward and then two steps back, and this seems a classic example.

It will be interesting to see how talks between the squad and the club can progress.