Chelsea have been behaving like they have a bottomless pit of money in the transfer window so far, but there will come a point where they need to sell players first.

Jorginho has shown that he can be more than a player who can only carry out a very specific role under Maurizio Sarri, but he suffers from playing next to Kovacic in the Chelsea the midfield.

The duo are far too similar although the Croat is the much better player, so it suggests that Jorginho might be the one to make way for a new arrival:

Chelsea would listen to offers for Jorginho and Lampard would like to use the potential fee for a Declan Rice bid. #cfc #WHUFC https://t.co/BTrVTJbG2i

Chelsea’s defence has been dreadful but it’s not just the back four that deserves criticism – they need to improve the player in front and behind them too.

The goalkeeping situation is a disaster that will also need to be addressed, but Rice would provide a solid shield in front of that back four that would allow the rest of the team to play with more confidence too.

Chelsea’s problem just now is they are easy to play through, so replacing Jorginho with Rice would be a smart move, but finances will always be the issue.

The report says West Ham want £65 to sell Rice and Jorginho is not going to fetch that much, but he could at least free up a wage and raise some funds to put towards the transfer. 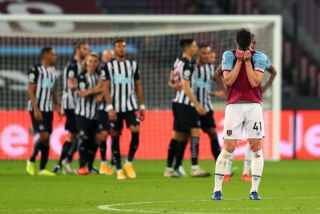