According to ESPN, Chelsea are in advanced talks for the signing of Sergio Reguilon from Real Madrid, the left-back has enjoyed a wonderful season out on loan with La Liga outfit Sevilla.

ESPN report that Reguilon’s brilliant campaign with the Andalusian outfit has attracted the interest of Manchester United, Spurs and Inter Milan – but the Blues are in pole position to recruit the ace.

It’s also mentioned that interest in the 23-year-old Spaniard has come about after Frank Lampard’s side have found it difficult to negotiate a deal for previous leading left-back option Ben Chilwell.

ESPN add that talks are still ongoing as to whether this would be a loan move or if Chelsea will sign the €25m-rated full-back on a permanent deal. 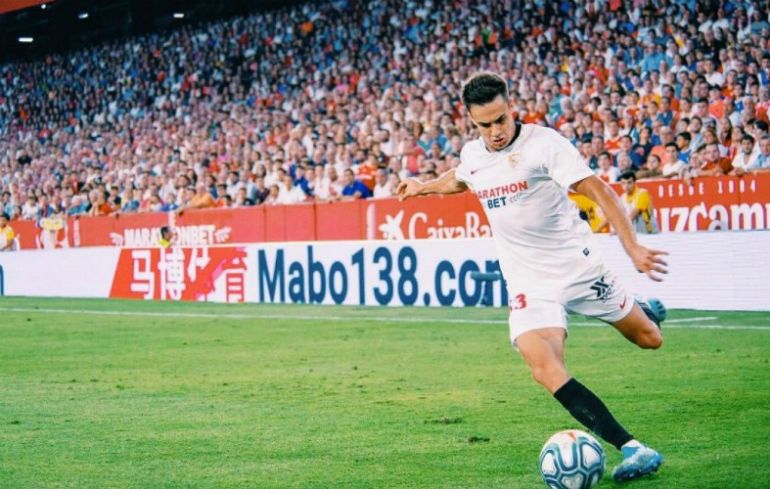 Reguilon looked as though he’d made his case to be Madrid’s No.1 option at left-back after keeping Marcelo out of the team for big parts of 18/19.

Once Zidane returned these hopes were dashed though, not only was Marcelo restored but Ferland Mendy was also signed in the summer – with the Frenchman now Los Blancos’ starting left-back.

Reguilon was ultimately sent out on loan to get first-team football under his belt and he’s not disappointed, he helped Sevilla to a fourth-placed finish.

The ace, who has been in Spain’s senior squad but is yet to win a cap, has scored twice and chipped in with four assists in 34 appearances across all competitions.

ESPN add that despite Sevilla being keen on keeping hold of the ace that Reguilon wishes to test himself in the Premier League.

Left-back has proved to be a problem position for the Blues this term, Marcos Alonso is left wanting on the defensive side of the pitch whilst Emerson Palmieri has fallen completely out of favour.

Reguilon offers a threat going forward but with his youth comes more physicality and pace, making the talent a much more reliable option on the back-foot than someone like Alonso.