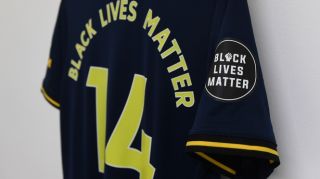 In news that will surely be welcomed by the majority of footballers across Europe, it’s been confirmed that UEFA will not punish anyone wishing to support the Black Lives Matter movement.

The uprising, coming in the wake of the death of George Floyd by Police in America, has continued unabated around the world ever since, sparking demonstrations the size of which has rarely been seen.

One of the biggest changes has been in sport, including football, where those who were previously too scared to speak out have now found that they do have a voice.

Finally, the various authorities appear to be responding to that call to arms, and UEFA president, Aleksander Ceferin, is keen that the protests are allowed to continue without fear of punishment to the players taking a knee or otherwise.

“It has been a wake-up call, for society and the wider European football community,” Ceferin said to the Daily Mirror.

“It is a reality that billions of fans sometimes pay more attention to football than to their elected political leaders.”

“Clubs and players have shown solidarity with society’s outpouring of pain, anger and sadness following the tragic death of George Floyd in the United States.

“Athletes from a range of sports have spoken eloquently of a moment of genuine potential for governing bodies to rethink their anti-racism programmes.

“UEFA has always recognised its responsibility, both to address any form of racial bias within European football and take concrete steps to fight the sickening use of racist language against players.”

It’s a move that’s long overdue and there may be question marks as to why it’s taken so long for this sea change to happen.

However, looking backwards does no one any favours. Perhaps this really does mark the turning point as the sport not only looks for change, but is part of that change.