Newcastle United midfielder Matty Longstaff could be heading for a Toon exit after his contract runs out at the end of the summer after receiving several offers from abroad.

Longstaff, 20, has been with the Magpies since 2016 and has worked himself through their youth academy and gone onto feature in the side’s first-team.

The midfielder has made a total of 15 appearances for Newcastle’s senior side and has scored three goals along the way.

Undoubtedly Longstaff’s finest moment came against Premier League giants Manchester United back in October 2019 when he scored the winning goal in a domestic game which saw his side take all three points.

However, Longstaff’s Newcastle United future has been cast into doubt as Caught Offside has recently obtained information from a source close to the player who believes his future at the club is ’50/50′.

It was reported earlier this year by The Times, that contract talks with the club had broken down, however, Longstaff’s contract situation appears to have improved since then.

It is understood that the 20-year-old is now just as likely to extend his deal with the Magpies as he is to depart.

However, despite Newcastle’s progress in talks with the player, it has been revealed to us that the youngster, who’s contract expires later this summer, has now received several offers from clubs abroad looking to capitalise on his impending availability.

Our source said: “I think he [Longstaff] has got some big decisions to make this summer.” 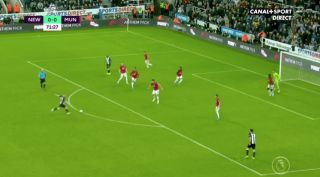