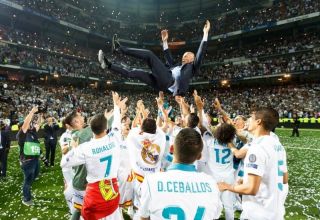 When Real Madrid step out at the Etihad Stadium tonight, they’ll do so with confidence.

Despite being a goal behind in the tie and without their captain and talisman, Sergio Ramos, Los Blancos’ form coming into the game against Man City has been exceptional.

Since lockdown, Zinedine Zidane’s side have played 10 La Liga games – and won them all.

Defensively, they’ve looked rock solid and have a number of attacking players who won’t be backwards when coming forwards if a chance presents itself.

Pep Guardiola will surely be desperate to knock out the team who have dominated the competition over the last decade, and the Catalan will know that his players will need to be at their very best to do so.

There’s also one incredible record that they will need to break if they want to progress into the semi-finals too; Zidane has never been knocked out of the competition as a manager.