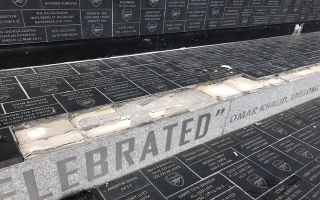 Arsenal supporting street artist ‘Northbansky’ has taken to social media to shockingly reveal that over 40 memorial plaques have been stolen from outside the Emirates Stadium.

The touching tributes to dedicated Gooners that are no longer with us are placed behind the steps of the Tony Adams statue.

MORE: Arsenal have expressed the most interest in signing wantaway Real Madrid attacker

The photos below show that the plaques appear to have been ripped out by a vandal in an absolutely disgusting act.

This is sacred ground for Arsenal supporters, the fact that someone’s decided to do this is devastating.

Hopefully these pictures being shared can help the north London outfit identify the culprit/s swiftly, a heinous act like this deserves the harshest of punishments.