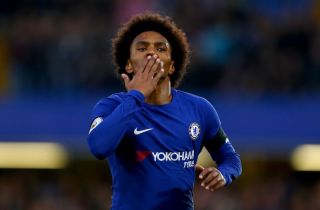 Chelsea winger Willian is reportedly ‘upset and even offended’ by how is career with the Blues is set to end as the 31-year-old nears a move to domestic rivals Arsenal.

Willian is understood to be on the verge of joining Mikel Arteta’s Arsenal after his contract expires later this month, as per Sky Sports.

The attacker has made 339 appearances for the Blues over a period of seven years in a spell which saw him rack up 125 direct goal contributions as well as win five major trophies including two league titles.

The 31-year-old winger was also named the Chelsea’s Player of the Year for the 2015-26 season after scoring 11 goals and assisting a further 10 in all competitions during that campaign.

However, despite a largely successful career for the blue half of London, the Brazilian’s time at the Bridge now looks set to be over with a switch to the red half edging closer.

According to ESPN, Willian is ‘upset and even offended’ with how his time at Chelsea has ended after he hoped for a three-year contract extension but was only offered two.

The same report states that Willian’s representatives felt that Chelsea’s ‘take it or leave it’ type offer on the table was a clear indication that they weren’t really that keen to see him stay.

Willian’s priority is believed to be to stay in London due to his family being settled in the capital. In addition to this factor, it is understood that Arsenal have agreed to meet his contractual demands.