According to the Evening Standard, Arsenal stopper Emiliano Martinez has told Argentine radio station Continental that the ‘only way’ he will stay with the Gunners is if he’s handed more playing time.

This season has seen Martinez become Arsenal’s No.2 choice between the sticks for the first time during his decade-long spell at the club.

Martinez looked reliable in cup competitions this term and has proved his worth with fine performances since being thrust into the No.1 spot following Bernd Leno’s injury in the second game of the restart.

The 27-year-old has performed superbly since and has told Continental that he’ll need more playing time or he’ll have to ‘move on’ to achieve his goals. 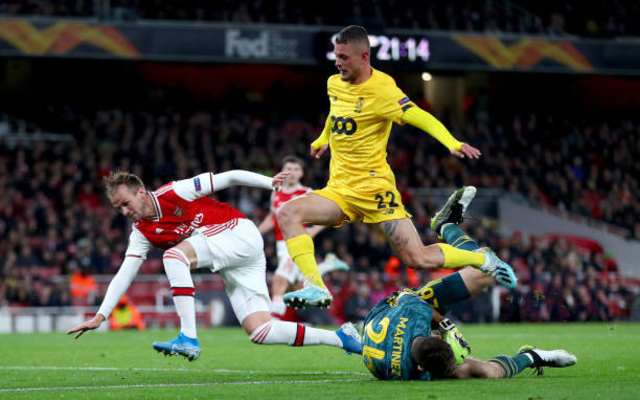 Here’s what Martinez had to say on his future with the Gunners:

“I have shown the club that I can play for them and when I return next season I need to have more games, that is the only way I will stay at Arsenal.”

“My target is to consolidate my place with Arsenal and to reach the Argentinian national team as number one.”

“I won’t stop until I get that and if I don’t play for Arsenal, then clearly I would move on.”

The Standard report that Martinez joined the Gunners in 2010 or £1.1m from boyhood club Independiente, most of the ace’s time has been spent out on six different loan spells.

Martinez has been a model professional during his time with the north London outfit and has capitalised on the opportunity he’s been handed following Leno’s setback.

The football world fell in love with the ace when he displayed just how much the Gunners’ recent FA Cup triumph meant in emotional scenes following the match.

Martinez has been called up to Argentina’s senior team twice in the last year, with the ace’s solid performances lining him up for a first cap whenever international football can safely return.

Martinez has clearly been working hard behind the scenes over the last year especially and he’s got every right to make these demands as he looks to kick on with his professional career.